Leicester Tiger - dies of wounds during the Battle of the Somme

In 1901, when Harry was six, the family were living at number 5 Wards End, Loughborough. He had an older brother and sister: John, born (1891) and Dorothy (born 1892) and a younger brother, William Eric (born 1901). Harry was educated at the Loughborough Grammar School and in 1911 the family had moved to 39 Market Place, Loughborough.

Harry was not married when he enlisted for short service (three years with the colours) in Loughborough on the 3rd September 1914. He was twenty years and three months old and joined the 8th Battalion of the Leicestershire Regiment on the 24th September 1914.

Harry had been an apprentice outfitter with Bailey and Simkin since 1910 and his apprenticeship was due to expire on the 21st May 1915. He was recorded as living at 39 Market Place, Loughborough in the parish of Emmanuel, and his religion was Church of England. Harry was 5ft 9ins tall with a chest measurement of 36 inches and normal vision. He weighed 12 stone 9 lbs, had a fresh complexion, black hair, blue eyes and a small mole on his abdomen.

TRENCHES 98 - 101. During the early part of the night of the 28th the enemy fired some rifle grenades into the right of our sector (98). No damage was done. During the night sent up an exceptional number of Very Lights. We had a wiring party in front of 99 sector.

Harry was reported ‘missing’ on the 5th August 1916 by the Officer Commanding the 20th Kings Liverpool. Recovery of his body was reported by OCGR working party; he had died of wounds on or shortly after 30th July 2016.

Across his medical history record are the words “Dead. Single.”

Harry’s identity disc was returned to his father on the 1st March 1918.

The inscription on his headstone reads: "His duty bravely done" 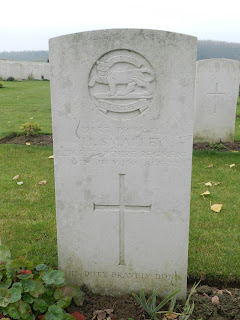