The Red Baron and the Dorset Flyer

I was recently chatting with the great-nephew of a Wing Commander who served as Lieutenant with the 1/6 Dorsetshire Regiment and was brought down by The Red Baron, Manfred von Richthofen, on 25 March 1917.

The pilot's name is Christopher Guy Gilbert (known as Guy).

Guy had seven brothers; sadly two were killed in action during the war. 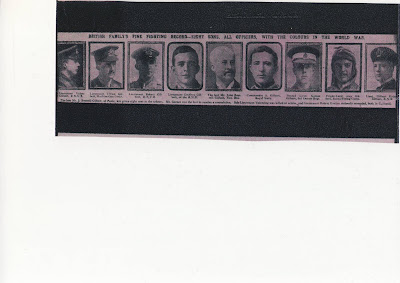 His brother Major Vivian Gilbert travelled with General Allenby to Jerusalem and wrote a book in 1923 called 'The Romance of the Last Crusade'
To read more about Major Vivian you can find a very interesting article here on Project Muse: http://muse.jhu.edu/journals/tdr/summary/v058/58.2.bar-yosef.html written by Eitan Bar-Yosef

On 2nd December 1914 Guy was commissioned into the 1/6 Service Battalion of the Dorsetshire Regiment.  The Regiment went to France on 13 July 1915.  Guy originally served in the trenches.  But then, he was transferred to the Royal Flying Corps and served with the 29 Squadron and this is where he 'met' Von Richthofen.

Based at Le Hameau, Guy was going to fly his Nieuport Scout as a  fighter escort to an FE 2b plane doing a dawn photographic reconnaissance.  There were a number of two-man escort patrols planned that morning and Guy and a Lieutenant Owen took the first slot at 0705.   It was a new plane for Guy and he thought that as it was a short flight he would be back in time for breakfast.  He decided not to dress, but just put his coat on over his pyjamas.

In Von Richthofen's report he says that at 0820 he was flying his Halberstadt DII and saw planes over  German lines.  Owen had to return to base as he was experiencing problems with his plane's carburettor. Guy stayed out to carry on with the mission and was alone over the enemy front-line.  Von Richthofen thought this was the last plane (unaware that others followed at later times) and opened fire.  Guy's plane came down near Tilloy-lès-Mofflaines, which is just south-east of Arras.

Guy was pulled from the burning plane by German soldiers and taken prisoner - still wearing his pyjamas.  He was in hospital for a while and Von Richthofen sent flowers and fruit to him.  He was The Red Baron's 31st 'victory'.  Guy made a number of attempts to escape from the prisoner-of-war camps, but never quite managed it.  He was repatriated in December 1918.  Guy lived to be 80.

There is some disagreement as to how The Red Baron died on Sunday, 21 April 1918, but the man officially credited by the RAF with bringing his red Fokker tri-plane down is Captain Arthur “Roy” Brown.  Von Richthofen was hit by a single bullet, but didn’t die instantly.  The .303 bullet penetrated his left armpit causing a fatal chest wound.  Brown was attacking from above and from the left, but the bullet came from below and to the right. The plane's engine had been switched off  and he managed to land it in a field near to the Bray-Corbie Road just north of Vaux-sur-Somme.  Sergeant Ted Smout of the Australian Medical Corps reported that Von Richtofen’s last word was “kaput.”  It is almost certain that a Royal Australian Artillary machine-gunner killed The Red Baron.
Manfred von Richthofen brought down 80 planes, not all of the pilots died, and if you would like to know more about the 80 'victories' I can thoroughly recommend a book called: Under the Guns of the Red Baron by Norman Franks, Hal Giblin and Nigel McCrery.  It is fully illustrated and has Von Richthofen's combat records with each 'victory'. 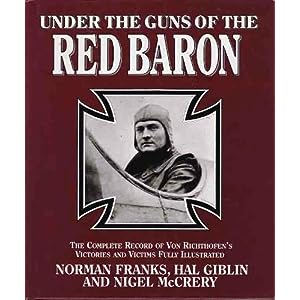 A 2008  film called The Red Baron  tells of Von Richthofen's war and you may remember the 1966 song Snoopy Vs. The Red Baron by the US band The Royal Guardsman.  Although the lyrics say "eighty men tried, and eighty men died", we know that eighty didn't die, and Guy Gilbert is testament to that.  If you fancy listening to the song just click here.

Grateful thanks to Ben and his Mum for the story and photos.


To read more about The Red Baron, click here and to find out more about his last flight and final resting place, please click here 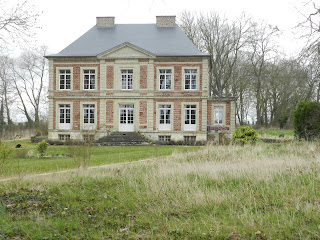 The house where Von Richtofen spent his last night before taking off on his fateful journey next morning from the airfield opposite.  The house is exactly the same as it was in 1918 (this photograph was taken April 2013)