I visited the Devonshire Cemetery  which is one of the most emotional and evocative places I have ever been. 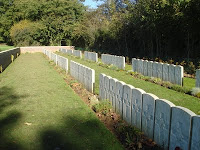 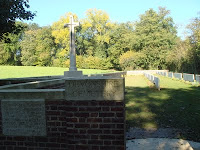 163 solders are buried here - all of the Devonshire Regiment

At the entrance is a stone which says it all:

If you stand on the road in front of the cemetery you can see where the German front line would have been: 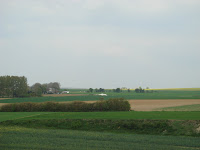 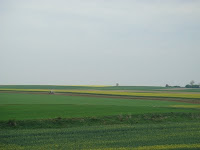 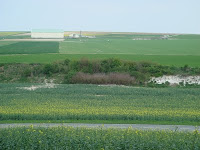 on The Somme. I ‘adopted’ a soldier called Marshal Williams where I placed a cross on his grave.  The  short story entitled 'Mametz' is a piece of creative-non-fiction.  By that I mean that the historical facts are true, as are the names, but the story is fictional. (Although I would love to  chat with him in the tranquillity of the cemetery, if he ever decides to meet me there.) 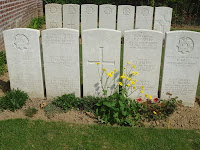 Please follow the links to see more about The Devonshires.

Di picked up the small poppy-wreath from the passenger seat and stepped out into the fresh air.  She followed the path as it wound to the right, rising steadily behind the trees.  At the top of a set of steep steps, she stopped to read the inscription on a pale stone to the left, just before the gate:
“The Devonshires Held this Trench, The Devonshires Hold it Still.”

A feeling of utter sadness swept through her and she closed her eyes and took a deep breath.  When she opened them her gaze fell on the cluster of small wooden crosses which had been placed in front of the stone.  She could smell smoke.  The aroma transported her back to when she was a young girl, recognising the same strong tobacco her Granddad had used.  She turned towards the gate and was surprised to see a young man standing there.  He threw his cigarette to the ground and smiled at her.
“Good morning M’am,” he said in a soft, west-country accent.
“Oh, you startled me,” she replied.
“Private Marshal Williams at your service,” he grinned.
“I was told that some cemeteries had guides, but I didn’t expect one here today,” she answered with a grin of her own.   “Diane Jeltes,” she offered her free hand, but he didn’t take it, he saluted her instead.
“So, where first?” she asked.
“That’s up to you,” his smile was endearing, cheeky yet full of warmth.
“I promised my Aunt I would put this on my Great Uncle’s grave, Captain Duncan Martin.”  She raised her left hand which was holding the circle of poppies.  Marshal raised his eyebrows and nodded.  She walked towards the gate and made to open the brass door set in the stone gate-post behind which she knew was a plan of the cemetery.
“You won’t need that,” Marshal said, “I can tell you where everyone is.”
“And, can you tell me anything about them?  You see, I never knew my Great Uncle,” then she felt stupid having made such a ridiculous faux-pas and tried to redeem herself by continuing: “well obviously I didn’t as he died in the War.”
“Of course, M’am,” he replied and opened the iron gate into the secluded cemetery.  She followed him through the entrance and together they walked over to the memorial cross which was bathed in the morning sunshine.
“Do you always dress like that?” she asked him.
“When I’m on duty.”
“I like to see a man in uniform,” she giggled as she looked down at the puttees, neat and smartly wound round his legs above his shiny boots.  He turned to her and, still smiling, said:
“Captain Martin was a wonderful man.”
“In what way?”
“He was kind, courageous and a true gentleman.”
Di looked along the two rows of white headstones on her left.  “How many soldiers are buried here?”
“A hundred and sixty-three.”
“And you know all their names?”
“Yes, well all but ten.”
“Haven’t you learnt their names yet?” she teased.
“They have no names, Ma’m.”
“I don’t understand.”
“They couldn’t be identified, but they do have a resting place.”
“Oh, sorry.  Please tell me more about Great Uncle Duncan.”
“He was brave and compassionate.  He tried to save his men from certain death.”
“How?”
“He had discovered the whereabouts of a German machine gun, over there,” he pointed straight ahead towards Mametz village.  “The Devonshires were supposed to attack the German front-line towards Fricourt,” he pointed to their left.  “Captain Martin had made a clay model of this area and worked out that if that gun wasn’t put out of action first, then Fritz would fire directly into his men.  He took it to show the higher-ups and they told him the gun would be taken out with early shell-fire. ”
“And was it?”
“They lied.”
“Oh my God!  What happened?” Di was starting to shake a little.
“On the morning of the first of July Captain Martin led his men over the top.  He made good ground and had almost reached the German front-line when, just as he had forecast, the machine-gunners opened fire.  His Batman, Private 19186, was hit and the Captain tried to drag him to safety.  Sadly he didn’t make it and he, and most of the front-line Devons, were mown down.”
“How awful.” Di brushed a tear from her cheek.  “So, is this where they fell?”
“No, it was over the road.” He again pointed above the beech hedge towards Mametz.  “The British front-line trench, where we are now, had been badly damaged by shell fire.  So, the attack had to start from the assembly trench, just up the hill.  Later that day the Devon survivors went into no-man’s land and recovered the bodies of their friends.  Then they brought them back here to this section of their front-line trench and buried them.”
“And Great Uncle Duncan was among them?”
“Yes Ma’m, he’s just down there.”  Marshal pointed to a small group of headstones at the far end.  “There was a service a few days later and they put up a wooden cross and wrote on it those words that you read earlier.  That has long since gone which is why a memorial stone was put up with the same words.”
“Then I shall be proud to place these on his grave.” Di looked down at the poppies then raised her gaze until her eyes met Marshal’s beautiful, twinkly-blue ones.  Her heart fluttered and she could feel her colour rising.   He winked mischievously.
“I won’t be long,” she told him, “but I would like to do this alone, if you don’t mind.”
“Not at all M’am,” he said and saluted.

She turned and walked towards the front row of headstones at the far end of the cemetery.
“He’s a charmer that one,” she whispered to herself, “he’ll break a few hearts.”   She looked along the white stones and noticed that the emblem on all of them was the same as Marshal had on his cap badge.  Ten were nameless saying simply: “A soldier of the Great War – known to God” .  At last she came to the headstone which was inscribed: Captain D L Martin, 9th Bn Devonshire Regiment, died 1st July 1916, aged 30.  She bent down and stared at the words and shook her head.  After a few moments she brushed aside a plant which was growing at the base of the headstone so that she could place the wreath.  Then she felt her heart lurch and she gasped when she read yet another inscription under that of Captain Martin:  19186 Private M Williams, 9th Bn Devonshire Regiment, died 1st July 1916, aged 22.
She looked up and surveyed the cemetery then rose to her feet and craned her neck. She was alone.  Not another living soul was there in the Devonshire Cemetery, but on the cool morning breeze she could smell the aroma of a freshly lit Woodbine and mused: