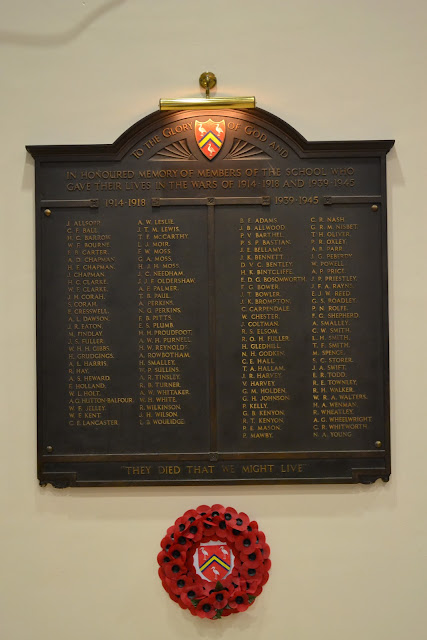 The Loughborough Grammar School Roll of Honour remembers those who attended the school and paid the ultimate sacrifice during the Great War and the Second World War.

Many are also commemorated on the Carillon in Loughborough's Queen's Park and other village and church memorials.

The Carillon  houses a wonderful museum which is open to the public from April until October - well worth a visit, especially to see the Leicestershire Yeomanry floor and hear the story of Loughborough's own War Horse - Songster. 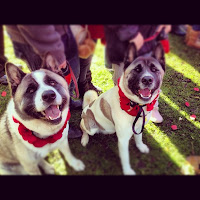 To mark the centenary of World War 1, I am writing a book about Loughborough, the main component being those who are named on the Grammar School's Roll of Honour, plus the effects of the war on the School and Loughborough town.

Much research has been done on those named, and if anyone has further information, which they would be willing to share, I would be very pleased to hear from you. I am especially interested in any photographs and family history as well as their military history.

If you are able to offer any stories or photographs, please do drop me an email, (address link below) - I would love to hear from you.

Posted by Dr Karen Ette at Wednesday, February 27, 2013 No comments: 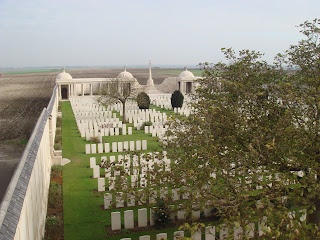 Dud Corner Cemetery where many casualties of the Leicestershire Regiment are commemorated on the panels surrounding the final resting place of those who do have a grave.

Family history can be exciting and rewarding, or it can be frustrating, especially if your name is Smith.  You can of course find a researcher to do the work for you and the one I would recommend is English Ancestry

Thurmaston War Memorial in Leicestershire has thee Smiths commemorated thereon, two of them brothers, Albert and Charlie. There is also another name, George Partridge and he is their brother-in-law; married to their sister, Annie.

There were ten Smith children in the Main Street (now Melton Road) household altogether: Charlie, Ben, James, Timothy, Frank, Fred, Ernie, Annie and Nelly plus Walter Warwick who Tim and Ellen Smith adopted as one of their own.

Charlie (Private 242316) was nearly 23 when he died on 9 April 1917 and is buried at Roisel Communal Cemetery Extension near Peronne, France. Private Albert Smith  was killed in Action on 29 July 1917 an is commemorated on the Menin Gate, Ypres, Belgium.

Lance Corporal 3529 George E Partridge enlisted in Leicester and joined the 1/4 Leicestershire Regiment.  He was killed in action aged just 26 on 13 October 1915 at the Hohenzollern Redoubt; a dreadful day for the 46th Division. His name is on panel 42-44 of the Loos Memorial, Dud corner (see above and below).


On 13 November 1916 George's parents put the following into the Parish Magazine:
In loving memory of our dear son, Pte. George Partridge of the 1st 4th Leicester Regiment, killed in action, Hohenzollern Redoubt, Oct 13 1915.


Just one year ago you left us,
And we miss your smiling face,
But you left us to remember,
None on earth can take your place.
From Mother, Father, sisters and brothers.

Janet Lucas wrote the following poem and has kindly given her permission for it to appear here:

My Grandma hardly knew
her brothers, she was youngest of ten
when they died in 1917,
she never spoke of them.

So I never knew,
vainly researching the third Smith,
until the phone call after Dad died
from George Partridge's daughter.

Lily never knew
her father, killed in 1915,
nor mother Annie,
sister of Charlie and Albert,
who died in 1918
of a broken heart.

They never knew
their Mother's face;
too young to remember.
No photograph for Lily an sister Nelly,
brought up by George's parents.

You never knew
of me
nor I of you
Grand-daughter of Annie.
And her only sister
seeing each other for the first time
91 years on.

But now we do. 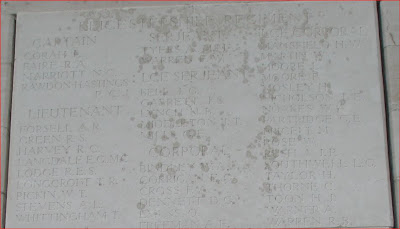